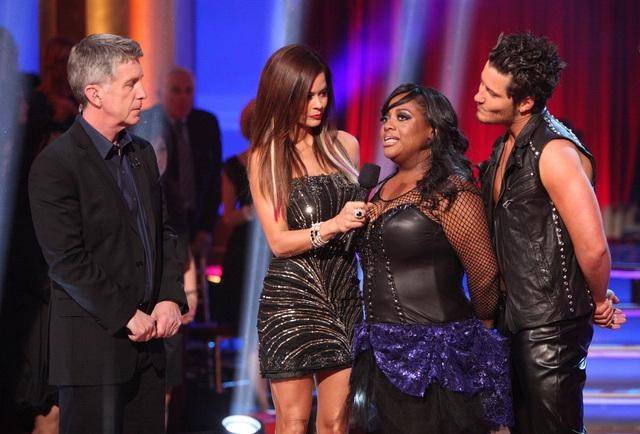 As fans of The View we have watched for years as Sherri Shepherd has gushed about her love of Dancing with the Stars and how much she wanted to be a contestant. We were thrilled when they announced that she would strut her stuff on the ballroom floor in season 14. But to say the field is tough this go round is an understatement, as pretty much any celebrity is capable of winning that Mirror Ball Trophy.

Sherri danced with grace, style, humor and excitement for three weeks, but in a shocking elimination was sent home this week. She could not control the tears as she talked to Tom Bergeron and Brooke Burke Charvet before taking her final spin with partner Val Chmerkovsky.

But through the sadness came the most inspiring words we heard this week. She first displayed her gratitude to the show, "Thank you for letting me live a dream that I've always had."

And then she encouraged all the viewers to do the same. "I want to say to every person out there, that thing that scares you the most, that makes you say, ‘I don’t know if I can do it, I’m scared,' run towards it because it’s so amazing on the other side.”

The next morning in an interview with Robin Roberts on Good Morning America she said, "If you don't go towards the thing you fear, you won't be able to say you lived, even if you fail. I got voted off. I wanted the ride to continue, but I got voted off. But I got to say I did it. So that thing that you fear in your stomach, the bubbles, run towards it. I absolutely believe that."

Watch Sherri Shepherd on The View weekdays. Check local listings for time. Tune in to see who takes the Mirror Ball Trophy on Dancing with the Stars Monday nights at 8 p.m. EST/7 p.m. Central and Tuesday nights at 9 p.m. EST/8 p.m. Central on ABC.