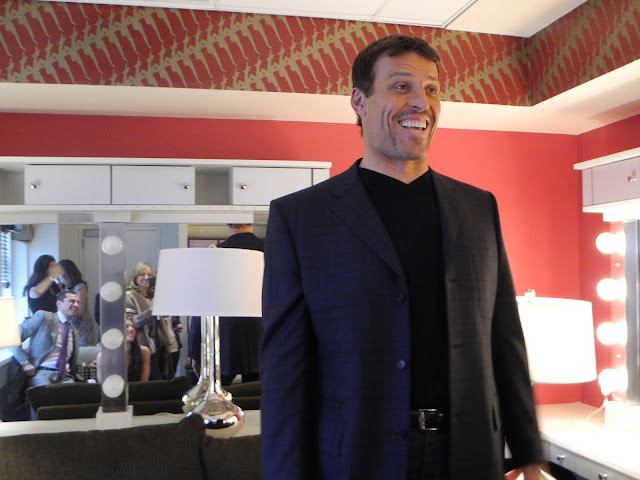 We recently got a chance to talk with Tony Robbins behind the scenes of Oprah's Lifeclass: the Tour. He spoke about a lot of topics from the changing economic times to finding yourself to being ready for a relationship. He also talked about real friends versus Facebook friends.

Tony mentioned the happiness index and pointed out that the U.S. as a whole was the most unhappy in a century when we were at our highest economic peak. Thus defeating the premise that money buys happiness. Sadly that state of being unfulfilled continues throughout the country today with the tough economic times we are in.

Tony has a theory for why that is. "People today tend to play life more shallow than deep. When people tell me, "I'm going to visit my friends,' and they go on Facebook, I think, 'Get a life.' If your idea of connection and relationships is texting, there's nothing wrong with that, but as the primary way you're staying in a relationship with people, I think you forgot what a friend is."

He reminds us, "Having a lot of people you barely know versus the people you go deep with is not very fulfilling, but it keeps you busy."

And he said that is exactly what people look for when they are unhappy. "When life is scary what most of us want is a distraction. So in the past it was food and it was alcohol and drugs — those still exist — movies, shopping, whatever. Now we have the Internet. We have the web. We have social media."

And he warns, "You have a bunch of people who have gotten addicted to a drug called technology. And that drug can also be a tool, it just depends how we use it. If we use it as a drug we pay the price and we feel that emptiness that you're talking about."


Watch the rest of our interview with Tony at our YouTube channel.