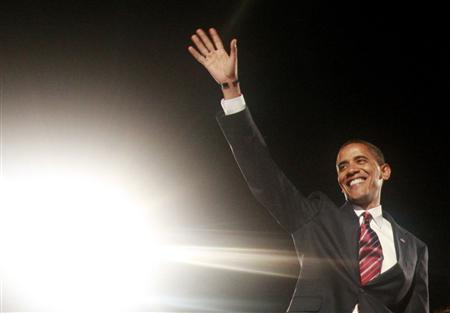 On Wednesday President Obama declared his support for gay marriage. And while the political pundits argue the pros and cons and election fallout from the move, we applaud his willingness to take a risk, make a stand and do what's right. And so we chose Obama's statement calling for equality in our nation as this week's most inspiring moment.

He stated, "At a certain point I concluded that, for me, personally, it is important for me to go ahead and affirm that I think same-sex couples should be able to get married."

And we are not the only ones proud of the President's statement this week. All of Hollywood is buzzing with approval for the POTUS' announcement that he has shifted his perspective on the topic. Here are some reactions we've seen rallying behind Obama's position.

On her Thursday show Ellen DeGeneres called Obama "brave" and said it was "an amazing day for our country." She and her audience gave the President a standing ovation.

On her blog, Kim Kardashian wrote, "This is such a huge step forward in our country’s fight for civil rights and I hope that today this will give hope to so many young people across the country... Today I am proud to be an American!! I’m so happy that our country is making history and moving forward. No more living in the past!"

And many more stars took to Twitter to show their support for Obama's statement. Here are our favorites:

Justin Timberlake: "@barackobama inspires me once again. True leadership is when you are willing to risk your power and voice so that ALL of ours can be heard.

Jane Lynch: "Obama: Marriage? Gay is okay!" She then followed that up saying, "Pretty darn happy today. Thanks Mr President, for supporting the dignity of my family and so many others!"


Suze Orman: "I am soooo PROUD of you PRESIDENT OBAMA YES YES YES it is about time. Marriage Equality is so very very important."

Kathy Griffin: "POTUS & VPOTUS: turns out, gays & lesbians should have SAME rights as rest of the country, shouldn't be '3/5ths' citizens. #evolved"

Lady Gaga: "Obama, congratulations on being the first sitting President to support marriage equality. Feels like the future, and not the past. #NoFear"

For related stories check out:
President Obama Urges Us to “Live Up to Her Expectatio
The "Saturday Night Live" Presidents Return