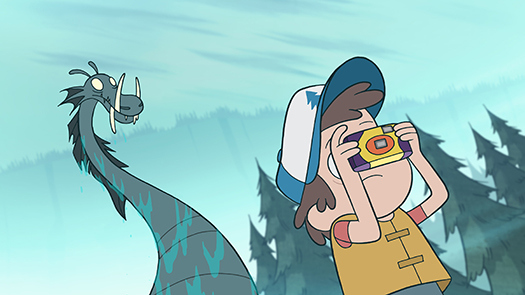 Photo from The  Disney Channel

We’ve been fans of Jason Ritter since he played the wheelchair bound Kevin Girardi on Joan of Arcadia. We loved him on The Class and were so sorry to see The Event come to a premature end. And while Parenthood ranks as one of our favorite shows of late, it is made all that much sweeter by Jason’s portrayal of the calm, down-to-earth Mark Cyr. And so despite the fact that we have no children of our own, we will been watching Gravity Falls, the new animated kids’ show on the Disney Channel.

We recently got the chance to do an exclusive interview with Jason. And, yes, we restrained from gushing about his Joan days. Instead we talked about what drew him to the show, how he thinks it will go over with adults and what he’s most passionate about.

Jason admitted, while he has never voiced a cartoon character before, he has always had an interest in the art form. He noted, “I grew up watching Disney films and I grew up going to animation festivals with my parents. I just always loved the magic of that.”

So when he made up his mind that it was a genre he wanted to pursue, he started auditioning, thinking, “It’s just a fun thing. Nothing bad can come from just auditioning. The worst thing that happens is you don’t get the part.”

Be when he read the script for Gravity Falls, something changed. “It was so funny, in such a unique way, that it was the first time that I got really excited and really invested in it.” He got the part and has been working with the creators for several years on the project. He stated, “It’s been a really a fun, long road… and it’s so exciting that we finally get to share it with everybody.”

He says it is the show’s unique, strange humor that will draw in the adult audience. He pointed out that what he liked about the series initially is that rather than having jokes for the kids peppered with a few under the radar grown-up jokes, the humor is written for everybody. He stated, “To see a Gnome get kicked in the stomach and throw up a rainbow for ten full seconds is funny to everybody. We can all laugh at that.”


He was, however, quick to qualify this statement, “Not if it happened to a real Gnome. I’m not condoning Gnome violence. But it’s just such a strange and funny show that I think that the humor will appeal to everybody.”

Another part of the allure for Jason was working with his co-star Kristen Schaal. We love Kristen for her work on Flight of the Conchords and The Daily Show and Jason agreed. “I’m a big fan of Kristen’s… She’s so hilarious and unique. So it was really fun and exciting for me to hear that she was going to be playing Mable.”

He continued, “She has such a great voice for cartoons and for this one in particular because it’s such a strange and bizarre cartoon. Mable is a lot stranger and more complicated than she initially seemed. So that has been really fun. There’s been a couple of times when she’s been in L.A. and we get to work in the same studio. That’s really nice to be able to improvise with her and play off of each other.”

On the show, Jason and Kristen play Dipper and Mabel Pines, two twins that have been sent out of the big city to enjoy rural life in Gravity Falls, Oregon, with their great uncle Stan. Grunkle Stan owns a tourist trap called the Mystery Shack and Dipper and Mabel encounter all sorts of odd, bizarre things there including monsters and other supernatural creatures. Jason admitted he is very much like his curious character. “I am mostly like my character, I would imagine. I really enjoy a good mystery. I love going on adventures… But the main difference between Dipper and I is that he is twelve. Other than that I think we’re pretty much alike.”

We were happy to discover that, as we had imagined, Jason was a down-to-earth, nice guy. And so we were not very surprised by his answer when we asked him what he is most passionate about. He replied, “People generally treating other people with kindness and respect… If someone treats someone like they’re less than them or someone tries to pull rank, it gets me so upset. So that’s one of the things that I’m passionate about is just trying to get people to be a little bit nicer to each other. There’s no good that’s going to come from being a jerk.” And true to the 12-year-old boy inside him, he added, “And I’m passionate about video games.”


An Exclusive Interview with the Creator of Doc McStuffins


Adam Wylie: The Actor Who Never Grows Up