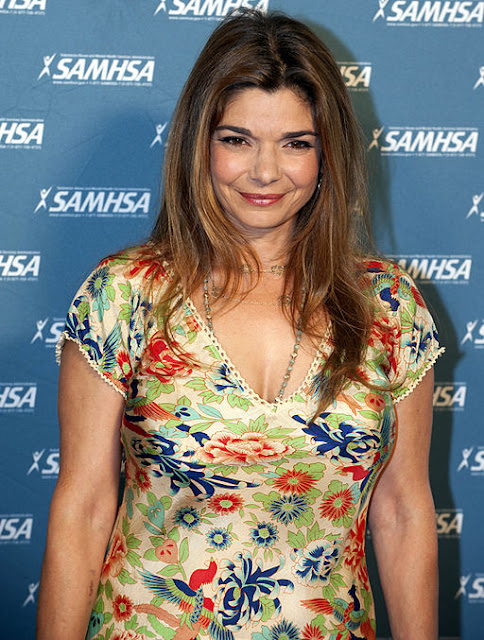 Laura San Giacomo returned to television this week in the TV movie TalhotBlond. Based on the real life story, and a documentary of the same name, the telepic explores a viral love-triangle that goes terribly wrong.

The Just Shoot Me star appears as the wife of a man played by Raising Hope’s Garret Dillahunt, who gets mixed up with a woman in an Internet chat room. You might think you can imagine where it all leads, but the wild tale might surprise you in the end.

And it’s the psychological drama that drew Laura into the story. She explained, “When I read the script I was really surprised by how involved these people got in the world of their own minds. And it was intriguing to me from that aspect. As well as, I was really surprised by what happened at the end of the story and how these people's lives were devastated by something that they created in their imagination.”

Just because the movie is a pyscho-drama, doesn’t mean the cast didn’t have fun on set. Laura said that working with Garret was especially fun. But fans who know him solely as the dopey dad Burt on Raising Hope might be surprised by the actor’s ability to go deep for TalhotBlond.

Laura praised her co-star, saying, “He's a very smart person, but he was very focused and concentrated on this role as you will see when you watch. He's just does an amazing transformation into this person, and he does a superb job. The movie does sit on his shoulders. And how we feel about these characters and how drawn in we are to the story sits on his shoulders and he does an amazing job.”

But it was the film’s director who draws the greatest admiration from Laura. She gushed, “You could probably imagine what it's like since so many of her fans have been watching her for so long. She has a really wonderful energy on the set, she was very well prepared. She's a very smart director. She got a great team together, the [Director of Photography Doug Emmett], the crew, the wardrobe person [Christopher J. Kristoff] — every one she picked very specifically, the music, everything.”

For her part, Laura zeroed in on creating a layered on-screen persona. She admitted, “I just really focused on what I thought was going on with my husband. So because a character doesn't really know what's going on, I had to just focus in a moment.”

She conceded that being swept up in one’s own personal drama is something that everyone can relate to. “Although maybe none of us take it that far, we all have gotten caught up in our lives in something that we have blown out of proportion. Whether it's something very negative that's happened in our lives or very positive it's very relatable that we've become maybe obsessed with it or it's taken over our imagination and our daily thoughts.”

One thing that Laura tried to do was avoid letting her mind get bogged down with the original source material too much. She acknowledged, “I watched the documentary, it was extremely sad to me that all of this happened. And then I detached from what happened to be in the moment, almost. And actually about three-quarters of the way through the shooting, I watched the documentary again and I was struck again by how moving it was to me and how disturbing it was to me.”

She added, “I had almost put it aside and gone into the moment to moment of what I was doing. So it was there hovering in the background to help me. But then it almost happened to those other people and I had to be in the moment.”

Watch as Laura’s character grapples with those moments on the Lifetime movie of the week TalhotBlond. Check the official TalhotBlond site for show times.