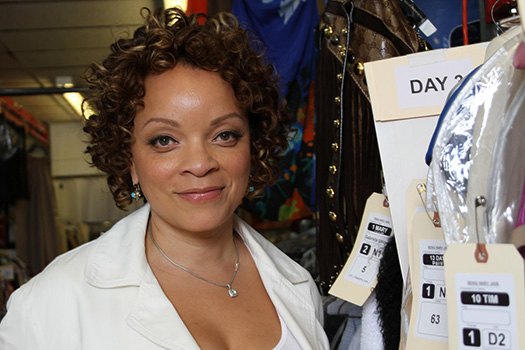 Next month Whitney Houston’s last film Sparkle comes out. The movie stars American Idol’s Jordin Sparks as a singer in the 1960s who starts a Supremes-esque girl group with her two sisters and they become huge Motown stars. Whitney plays their conservative, religious mother. We recently spoke with Sparkle costume designer Ruth Carter about working with the actresses and some of her other career highlights.

Ruth told us she decided she wanted to be a costume designer when she was a sophomore in college. She recalled, “I wasn't cast in a play and the director in return offered me a position as the costume designer. From that moment on, I knew that it was meant for me, because I was even more excited about being able to dress someone based on the character and research.”

And so she has spent 25 years working in the wardrobe department on films like Amistad and Malcolm X (both of which she garnered Oscar nods) as well as Jungle Fever and Frankie and Alice. She has dressed such Hollywood stars as Halle Berry, Eddie Murphy, Vanessa Williams, Morgan Freeman and Angela Bassett. And with her next film, The Butler, due out in 2013, she will add Oprah Winfrey, Nicole Kidman, Liam Neeson, John Cusack and Minka Kelly to that list.

She talked about designing the costumes for this film. “The pieces in the upcoming film The Butler range from the 1920s during the sharecroppers days and continues through eight presidents and ends with Barack Obama. It has the opulence of the 1930s and the passion of the Civil Rights Movement and the amazing story of an African American man who started off as a sharecropper to later become a butler for eight consecutive Presidents in the White House. This piece recalls significant times in history and in fashion.”

Sparkle is also a period piece, set in the 1960s.  She said that star Jordin Sparks was particularly enamored with the styles of the era. She stated, “Jordin recently lost an astonishing amount of weight and was excited about wearing the vintage clothes. With racks upon racks of 1960's clothing, Jordin saw herself fitting into the pencil skirts amongst many other fascinating pieces.”

Ruth also talked about her time working with Whitney, “Designing for Whitney Houston was an amazing experience. Whitney is a consummate professional. She allowed me to take the lead on what she wore, but she shared her experience growing up in a religious household. Whitney's mother was strict religious parent in her early years — just like her role in Sparkle.”


We asked the designer if there was one costume from the film that held a special place to her. She shared, “My favorite piece from the film was Carmen Ejogo's Twiggy dress, that was designed complete with an attached metal necklace.”

And so it was no surprise to us when we asked Ruth which pop culture icon she would like to be for one day that she replied, "Twiggy. She traveled all over the world. She was adored and was adorned in the beautiful clothing. She wore some of most innovated fashion trends of her time that are still emulated today.”

But despite her recent accomplishments, some of Ruth’s most memorable moments took place earlier in her career. She noted, “My proudest career achievements to date are Malcolm X which gave me creative freedom and Amistad as I couldn't believe I was actually interviewing with Steven Spielberg.”

She described some of her favorite memories from her experience on Malcolm X, “I was invited to Chicago to purchase coats from the 1950s. I was taken to an old warehouse full of coats that were priced at $5.00 each, which was unbelievable. So I purchased piles upon piles of coats amazed at the miraculous price.”

She also recalled a day on Amistad that still stands out as one of her best, “Amistad's memorable moment was in Puerto Rico dressing so many people beginning at 3 a.m. Upon completion, I stepped back to see the outcome and I was enveloped by people whom I had completely dress. I wandered around this historical fort where we were filming and couldn't find the crew. Just a sea of background dressed in 1839. So many people dressed as auctioneers, buyers and slaves in chains. It was unbelievable!”

Check out Ruth’s latest work when Sparkle opens in theaters on Friday, August 17. Check local listings for locations and times.