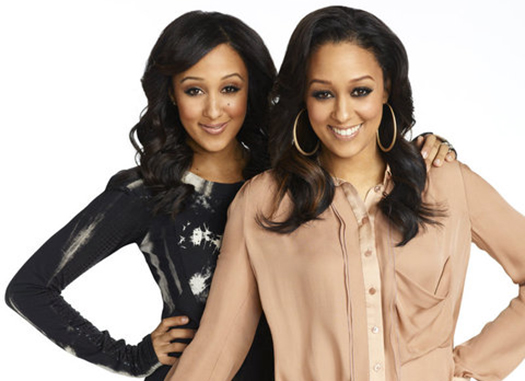 It’s been a while since we’ve had an installment in our celebrity sibling series. But whenever we get the opportunity to talk to brothers or sisters who work together in entertainment we jump for the chance. We love to find out why, like us, other siblings like to work together and what challenges they face. In a conference call interview identical twins Tia and Tamera Mowry, who grew up in front of eyes on Sister, Sister and now are exposing their personal lives on reality TV with Tia & Tamera on Style Network.

Working with siblings, like any business partner, has its up and downs and the Mowry sisters are no exception to that rule. But from the sounds of it they have more ups than downs. Tamera stated, “The best part I would have to say about working with my sister is it never feels like work. I totally forget that the cameras are there and we just have fun.”

And Tia added, “For me the best would definitely have to be you don’t have to work on chemistry. It’s just natural. Usually when you’re working with someone that you don’t necessarily know, you have to work on the chemistry and build that chemistry but for my sister and I it just comes natural for us and I really enjoy that.”

Of course with any reality TV show, the downsides are recorded for the world to see and that is the worst part for Tamera. “You’re going to have your days where you might be annoyed with the other one or you’re just tired and unfortunately the cameras are catching that as well.”

Her sister agreed, “It’s a blessing working with your sister and a family member but also it can be difficult because if you’re having issues like every sister, brother or even husband and wife that work together, you’re going to have some disagreements. You take it with you to work. And that can be hard, shutting off your differences and just going to work. But I think it makes your relationship stronger and more mature.”

They did reveal to us their secrets for a success sibling partnership. Tamera divulged, “You realize that you are going to have differences, you’re not going to agree all the time and mainly just to respect the other person’s opinion. Just respect who they are... I think that’s what makes it work.”


Tia had another piece of advice for siblings working together, “The secret is my sister and I, we never go to bed angry.” She continued, “That it’s very important for you to really talk out your issues and not allow it to fester and grow because that’s when assumptions take over and that’s when just unfinished business becomes an issue… We just like to just hammer it out and move on.”

Tamera picked up on her sister’s direction and added, “That’s the coolest thing about us, we don’t have bitterness. You know how people hold onto crap for years and don’t talk to their family members? We just get it all out. I think it’s better that way.”

Working together has also bee a learning experience for the sisters. Tamera explained that as young girls they were army brats and grew up in a very disciplined environment. She recalled, “Once we moved into our own house, our own personalities, our own thoughts, our own beliefs began to emerge. And when you come from a place where you’re a unit and then you walk into that place you’re like, ‘Whoa, wait a minute. Okay. Who are you?’ So we had to learn to respect each other’s differences, appreciate who the person is, love each other unconditionally and love each other for those differences. And I think throughout that process I’ve learned forgiveness. I’ve learned even forgiving yourself.”

Tia, naturally had similar, yet slightly different views, “What I’ve learned just from my sister and I’s relationship over the past few years is patience. We’ve both learned and allowed ourselves to grow into who we are. When you’re twins and you’re attached at the hip, everybody thinks that everybody should be the same and alike… We were able to evolve into our own individual people, like Tamera said, with our beliefs, our own styles, our own ways of life just in this world. What we had to do was to allow each other to grow, to allow each other to become a work in progress… We just had to learn from each other and respect each other and allow each other to grow at their own pace and just have patience with each other.”

She also added, “The main important thing is love and love unconditionally and use no judgment. It’s sad that we have a lot of judgment in this world and love seems to be earned. With my sister and I, we’ve learned to respect each other’s differences, to learn from each other’s differences. And if we apply that into the real world, this world could be a better place really.”

Watch the season finale of Tia & Tamera tonight at 8 p.m. EST/7 p.m. Central on Style. Season 2 will continue on October.