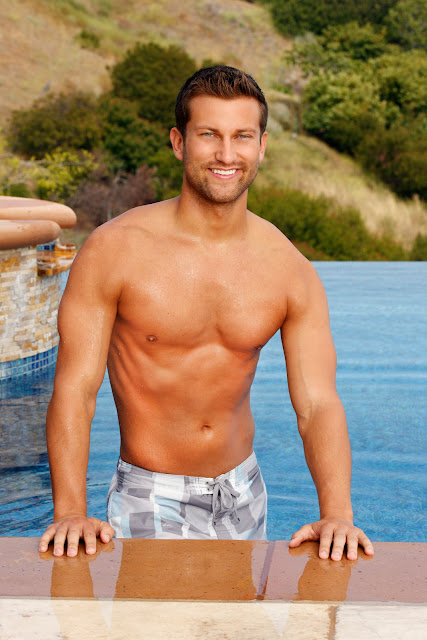 Watching this season of Bachelor Pad makes us understand why people hate reality TV. After all, how can these contestants actually be making these ridiculously inappropriate choices — someone has to write this stuff, no one would actually choose to act that way. We, of course, are riveted — carefully plotted out or not, it’s must-see TV for us.

Needless to say to anyone who’s been watching, all the drama rests in the hands of Chris Bukowski. The 25-year-old corporate sales director from Chicago, Illinois, came off as one of the better catches on the last season of The Bachelorette. Although he was a little too young in most people’s eyes, he was a nice enough guy and seemed genuinely heart broken when Emily Maynard sent him packing.

But when Chris showed up at the Bachelor Pad he was a different guy, thanks in part to the sting of the recent rejection. His mission was simple — to win money, not find love. Unfortunately for the girls who were there looking for both, he left a string of angry and sobbing hopefuls to whom he’d vowed his loyalty.

Smooching and cuddling ensued. Alliances were broken. Roses were and weren’t handed out. And one of the most brilliant moves in Bachelor franchise history was played out. Saving himself, Chris managed to get the uber-popular Mike Stagliano sent home.

In a recent conference call interview, Chris attempted to justify his not-so-nice strategy. And since we live by the Thumper rule here on PCP — if you don’t have anything nice to say, don’t say anything at all — we’ll let him speak for himself.

ON HIS ORIGINAL PARTNER, BLAKELY
“I don’t regret being partners with Blakely.  And we became partners by chance.  And I was lucky to have her as my partner.  She is probably the most athletic girl that was on the field.  And as far as from a competition standpoint, I thought that was going to be perfect, especially early on in the physical competitions. I was happy to have her as a partner but… it started not being fun for me. There was a lot of work.

ON BLAKELY NOT GETTING VOTED OFF IN WEEK FOUR
“I was confident, I had faith in my guys that Blakely was going to go home.  And when she didn't go home, I basically said, "Oh, s#*t."  And I was like, ‘Oh, goodness, this can't be good for me.’”

ON HIS STRATEGY FOR BLAKELY IN WEEK FOUR
“My strategy was to get Blakely out and it was to break up the main alliance just because I felt everything going in a direction to having someone win besides myself.  So I felt like I was going to make a bold move, vote Blakely out.

“And I felt it like going into the next week that Jamie would be on my side and in my alliance.  And then there would be a new alliance formed.  And we would have the majority of the people.  And I was trying to do something bold.

ON WHAT HE DIDN’T LIKE ABOUT BLAKELY
“From the beginning I said that [Blakely] is a great competitor.  I may have told her that I wanted to be partners with her until the end but she took it differently…  You guys all saw her I say, ‘Stop thinking emotionally and all that."  I told her to not think emotionally but it wasn’t going to work out.  And I was at the point where I wasn’t having fun in the house anymore with anybody. I wasn't communicating with anybody, it was just me and Blakely, me and Blakely all the time.  And that wasn't fun for me.

ON HIS PLAN FOR JAMIE
“I was attracted to Jamie and we did talk about how we didn't want to get emotionally involved in the show. That was a big part of me as far as how I was going… to win these games.  I didn't think to be emotionally too [strongly] involved with a girl was the best strategy.  And we talked about that.  She was there for the money just as much as I was.

“And I think we just had a little misunderstanding, obviously.  And she was going to be part of the strategy if I and she'd stayed around.  And it's just didn’t work out in my favor or her favor.  So she was obviously upset and rightfully so.”

ON WHAT HE DIDN’T LIKE ABOUT JAMIE
“Jamie is a great girl.  And I didn’t lie when I told her that I thought she was the most attractive girl from Ben's season because I meant that.  And I've told my parents that before when they were watching the show… She couldn’t be a good partner just because the girls really didn’t get along with her too well in the house.  So if I made that move and was partners with Jamie and when the next show is ending I'm pretty much out of the door.

ON IT (NOT) BEING HIS FAULT THAT JAMIE FELL FOR HIM
“I'm not going to say it's not my fault, but obviously it takes two.  And I denied her more than once.  And we talked about not getting so emotionally involved during the show. So, yes I'm not going to sit here and say that it's a 100 percent my fault.  But, yes, it is my fault, I did lead her on… I wanted to kiss her.  It was just, I couldn’t be partners with her, I just couldn’t because for my sake of the game, it just wouldn’t be a smart move for me.

“And it takes two, it really does as far as any kind of relationships in general, it takes two.  It’s just not me.  So she’s a smart girl.  And she could have realized that, ‘[It’s] probably not the best idea for me to pursue Chris.’ And she could have moved on.  And it was just really a tough situation to be honest.”

HIS REACTION TO JAMIE TELLING HIM HE’LL REGRET HIS ACTIONS
“To be honest, I was expecting a big hug from Jamie.  I did not think that she was going to call me out like that and I was shocked when she did because I actually was campaigning for her to stay.  And I was trying to make a critical move in the game.  And for her to say that, I can understand why she was hurt and stuff but I really didn’t expect that from her. So it is what it is.”

ON WHETHER OR NOT HE’LL MAKE UP WITH JAMIE
“I hope so.  I didn't think it was what is happening, you don’t really know how bad it really is.  You don’t see everything.  And I honestly didn't know it was that bad for her because we did talk about how we did not want to have this relationship on the show. And that we talked about if there were something after the show, if there was something there then definitely we can consider pursuing it.  Yes, I do, I feel for her.  And I'm sorry but at the same time, it’s just what I did.  I did it and I can’t take it back.

“Will I reach out for her?  Yes, I would but, I think right now I would like to leave it as is and let everything play out.  And I feel for her and I think about her, I really do.  I think about it everyday. And I don’t want to hurt anybody's feelings.  And I obviously, hurt her feelings.  But if there was no game and if there was just me meeting her out sometime, I do think that something could be there. I can’t be judged on how I am with relationships from being on game show. I just can't.  And that’s just not the way I am.  I was just playing a game and she was part of it.  So yes, I would definitely like to patch things up with her eventually.”

ON TAKING SARAH ON A DATE
“As for where I stood taking Sarah on that date, it was a huge game changer because Sarah was very neutral as far being in the house but she wasn't on that alliance that I was on with Blakely.  So, it wasn’t looking too good.  Let's put it that way.”

“Jamie is a sweet girl.  She's gorgeous too.  She’s a very pretty girl.  And Sarah, she would fit into my group of friends perfectly.  She’s very outgoing, not shy, very honest.  And she's just fun and out of two of those girls, I definitely see something if I met them outside of the show, something happening.”

ON UNDERSTANDING THAT ED AND KALON WERE STRATEGIZING, JUST LIKE HIM, WHEN THEY VOTED AGAINST HIM
“That’s something that I understood right away that these guys, everyone has the same right to play the game as I do. So of course, I'm angry because Kalon and Ed, they're just friends of mine.  And in the real life, you don’t expect to be lied too by your real friends.  But I come to the realization that these guys are trying to win the money just as much as I am.

“So it is what it is and you try to brush it off.  It's just tough when you're in that house with everybody and they're the only people that you're seeing all day. And you got to see their faces over and over and when they just lied to you, it's not easy.
But I understand that it is a game and they're playing the game as well.”

Watch Bachelor Pad on Monday nights at 8 p.m. EST/7 p.m. Central on ABC.
Posted by Pop Culture Passionistas at 2:00 AM