Katie Leclerc on Playing a Deaf Role on Switched at Birth 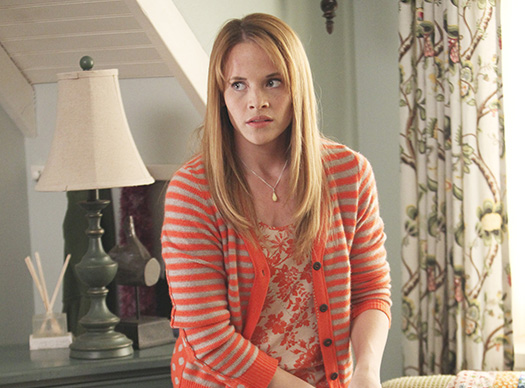 Katie Leclerc, who plays Daphne Vasquez on ABC Family’s Switched at Birth, is a true inspiration for any kid struggling today. In a recent exclusive interview Katie talked about playing a deaf role, her own hearing loss, trait she shares with Daphne and advice for deaf kids.

On Switched at Birth, Daphne Vasquez lost her hearing when she got meningitis as a kid. In real life Katie did not develop hearing problems until she was 20 years old. She recalls, “When I was 17, I needed a foreign language in high school to graduate. I quickly found out that I couldn’t do Spanish; I was not so good at that. My sister was an American Sign Language teacher and my school offered it and I thought that would be really fun. And so I took it. And then at 20 I found out that I had something called Ménière's disease.”

She explained that the condition is a build up of fluid in the inner ear that can strike at any time and causes hearing loss, vertigo and ringing in the ear. She said, “The attacks come and go as they please with no rhyme or reason. And it’s somewhat challenging because when the room is spinning in every different direction and you don’t know which way is up, it’s hard to remember that without this disease… I would not be able to play the role of Daphne.”

Katie noted that in the deaf community only those with real-life hearing impairment can play a deaf or hard of hearing role. And so if she had not been afflicted with Ménière's, she would not have been cast on Switched at Birth, which she calls her dream come true. She stated, “It’s a struggle but I’m ultimately thankful for it because it brought me to where I am.”


And while Katie had words of wisdom for other kids with hearing loss, she urged all kids to heed her advice. “It’s really important to be active in your community, whatever community that is. If you’re deaf or hard of hearing then that means going to one of the deaf meet up nights at the local coffee shop. If that mean you have other struggles, whatever it is if you’re being bullied, find allies and find people who you relate to and who make you stronger as a group. You just need to actively be a part of your community… Do whatever you can and try to leave a mark for the best.”

But hearing loss is not the only common ground between Katie and Daphne. The actress divulged, “[Daphne] is strong and a survivor and annoyingly optimistic, which are qualities that I would hope to find in my own life.”

In addition, two of Daphne’s hobbies, basketball and cooking, are also activities Katie has taken part in. She commented, “It’s really funny that these things that Daphne finds enjoyment in are also things that I do. So it really makes it easy to play that role. It’s really fun.”

But it’s not all fun and games. She continued, “It’s definitely the most challenging role I’ve ever had — to speak two language at the same time and speak in an accent and remember your lines and do everything else that an actor’s supposed to do. But I am surrounded by the most incredible supporting cast. It’s an ensemble show and everyone is so talented and we love each other so much, so it is really just a joy to do it.”

We asked Katie where she thinks Daphne will be in five years and she replied, “Doing whatever makes her happy. If that means cooking, then that would be incredible. Or if that means she’s a writer or something else, Daphne is a really good example of somebody who doesn’t take no very well and she compensates. She figured out ways to make it work. So in five years I just see Daphne happy in whatever she’s doing.”

And it seems being happy and making people happy are utmost on Katie’s mind. Even when it came to choosing which pop culture icon she would like to be for one day. She answered, “David Bowie. He’s pretty iconic. David Bowie has the crazy hair thing going on with the tight leather suits. Whenever you think of David Bowie I think everybody just smiles and I just immediately think of eight songs. He’s pretty cool. He’s pretty suave.”

Watch Katie in the fall premiere of Switched at Birth on Monday, September 3 at 8 p.m. EST/7 p.m. Central on ABC Family.