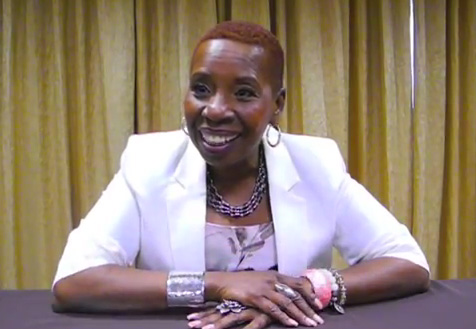 Iyanla Vanzant is an author, speaker and life coach, who has helped millions heal relationships. Her new series, Iyanla, Fix My Life premieres on OWN on September 15. We had the pleasure of sitting with Iyanla recently to talk about the new show, her old show, why we’re all broken and Mary J. Blige. We give you the wise words of Iyanla Vanzant.

On the Fundamental Reasons People Need Fixing
"We're crazy as hell. We're crazy. Human beings are crazy and they lead messy lives. In part because we don't know how to just be people. In part because we think we have to be perfect people. And when I see your imperfection it makes me nervous about my own, so I'm coming after you. I want you to be worse off than I am. We are crazy. And we live in a society, in a world, in a social structure that encourages, programs, conditions, us to reach out instead of rich in.

On Her Greatest Teachers in Life
“My children, because children bring to life the subconscious issues of the parents. So when I look at my children and I saw their challenges, their struggles, their difficulties, I knew what was going on in my mind. So they've been the greatest teachers for me. Externally I have to say my birth mother, who died when I was three. And you know why she was my greatest teacher? Because she taught me nothing. And I had to OJT — on the job training. She taught me nothing about being a wife, nothing about begin a mother, nothing about being a woman. And I had to make it up on my own and then un-learn it. Had she been here I wouldn't have had that opportunity.”

On What She Learned from Her Series Starting Over
“That you don't have to be perfect to make a powerful contribution. There's no time when you're going to be totally healed or whole, well when you're dead, that's when you're healed… When I did Starting Over was probably one of the lowest times in my life. I had just buried my daughter, just ended a marriage, in the process of surrendering my home to the bank, filing bankruptcy, working through some wonderfulness with the IRS and I was still able to do a powerful work in a very authentic way. Because I think at your worst point, the quickest way to move through it is to be a contribution as opposed to focusing on your problems. If you focus on your problems and keep giving them attention, they're going to grow. If you ignore them and do something else, I don't mean act like they're not here, but do something meaningful it helps you work through it.”

On Oprah’s Lifeclass
“Lifeclass the concept is genius. Sit in front of your TV with no bra on and take notes about how to be a better you. It doesn't get any better… free. I got degrees up the wazoo that I paid for and to be able to do that at home for free. Is that amazing? That's genius. I hope that I am honored and blessed to be able to participate to look at the hard issues that people struggle with. Let's do a Lifeclass on 'I feel ugly.' Do you know how many people think they're ugly? Or 'mom liked you best.' All of the things that people struggle with; let's do a Lifeclass on them. So that all of the ugly, inferior people can sit at home, braless, with a note book and get healed.”

On How Parents Can Break the Cycle
“Every parent, be the best you you can be as a demonstration to your children of what is possible. I think every parent needs to be willing to admit they were wrong — when you made a poor choice, a bad decision, when you acted too soon, you were mean. Each parent has to be a demonstration of the power and the possibility of being in relationship with your source — whatever that is for you. If we don't teach our children about something grander than us, bigger than us, then they can get stuck in our littleness, in their littleness. If our children know that there's a source, a creator, a life-form, whatever you want to call it, I call it God, that's bigger than me, that's more forgiving than I am, that really has things worked out and covered. If parents demonstrate that, then children will emulate it.”

On Doing Better for the Next Generation
“It is so important for us to understand, that if nothing else, every moment of our lives is a legacy for those who come behind us. Not everybody is going to be in the Guinness Book or on Google. You may not come up in the Google search. But there are neighbors, cousins, nieces, nephews for whom you are a legacy. So you have to understand that you matter. Everybody matters. And that gets lost in the craziness. You matter. And you have a responsibility to yourself to be the best you possible because somebody's watching you. Somebody's watching you all the time — little girls, little boys, other wives, sisters. Somebody is watching you. Don't embarrass yourself by acting like a fool all the time. Don’t embarrass yourself. Somebody's watching you.”

On What She’s Most Passionate About
“I love women. I love women. I don't mean I'm in love with a woman. I don't mean that. I love the feminine expression of god. That's what I mean. I love how we look. I love how we smell. I love how we walk and move. I acknowledge we're having some trouble in these platform shoes they're making. We can't move like we used to. I love how it sounds when a room full of women are laughing. I love what we can do when we're clear, when we're conscious, when we're on point, when we're on purpose. Imagine — a woman raised every president this country has ever had. Imagine — a woman gave birth to every king, every ruler. Some of our births have gone awry, but okay. From Betty Crocker to Oprah Winfrey. Come on now. Look at that. I love women. I'm passionate about us standing authentically in the truth of who we are. Because if we stand authentically in the truth of who we are — teaching, nurturing, nourishing, dancing, praying, this world will be such a better place for us to be in.”

On Which Pop Culture Icon She Would Be for One Day
“I would say, Mary J. Blige. I just want to walk out onstage in some tight pants and hear people singing my song. Oh my god. For me… [She sings and laughs like only Iyanla can]… for one day, just Mary J. Blige. She is exquisite to me. That's what I want. So I could stop singing in the bathroom and making a fool of myself.”

To see the video of our interview with Iyanla, visit our YouTube channel.

Watch Iyanla’s new show Iyanla, Fix My Life when it premieres on Saturday, September 15 at 10 p.m. EST/9 p.m. Central on OWN.