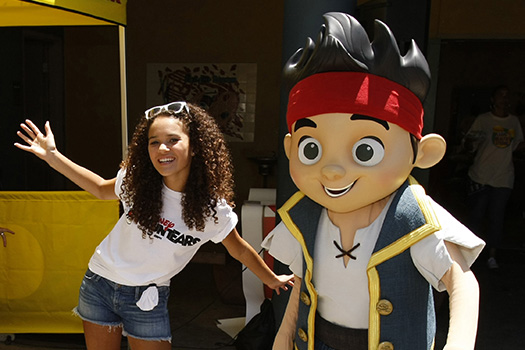 
Looking for a kid-friendly way to spend International Talk Like a Pirate day this September 19? Why not tune in to the Jake and the Never Land Pirates special Jake Saves Bucky. In a recent exclusive interview the series' star Madison Pettis talked with us about the primetime movie, how she's like her character Izzy and what pop culture icon she would like to be for one day.

On the new special, which airs on Wednesday, September 19, Jake, Izzy and Cubby must race Captain Hook in his vessel the Jolly Roger. But if Hook wins, he gets to keep their boat, Bucky. Madison stated, "Obviously we love our ship and we don't want anyone to have Bucky so we're really confused about what to do." So the kid pirates enlist the help of Peter Pan to get Bucky back.

Izzy, the only girl on the crew and the keeper of the magic fairy dust, is a lot like the actress in real life. Madison explained, "She's really spunky and all about girl power. She can do anything the boys can do and she's always willing to help them. She's just a really good spunky girl role model."

The series, aimed at kids between the ages of two and five, tries to send good messages to the viewers. Madison noted, "That's what we're really all about. Captain Hook is the bad guy and all the morals we're trying to teach about sharing and teamwork, that's always something we're trying to help Captain Hook learn, as well as the kids at home."

In an extended effort to help kids learn, Disney Junior has launched four mini-games on their website as well as a pirate name generator. Kids can log in, answer some questions and be assigned a pirate moniker based on their unique responses. There is also a printable coloring book illustrating some of the principles of the show including bravery, confidence, kindness, loyalty and helpfulness.


We asked Madison, "What are you most passionate about?" It was no surprise that her answer was "acting." She said, "I've been acting since I was five and I hope it's something I can do forever. I love it. And I also love to dance. I've been dancing since I was four as well. And when I get to combine those that's even more amazing."

It did catch us a little off guard when she chose The Beatles as the pop culture icon she would like to be for a day. "They have the craziest fandamonium. To live that life for a day, go on tour and travel and have girls chasing your tour bus, that just seems like the craziest thing to me. So I would love to see how that feels for a day."


Adam Wylie: The Actor Who Never Grows Up
An Exclusive Interview with the Creator of Doc McStuffins