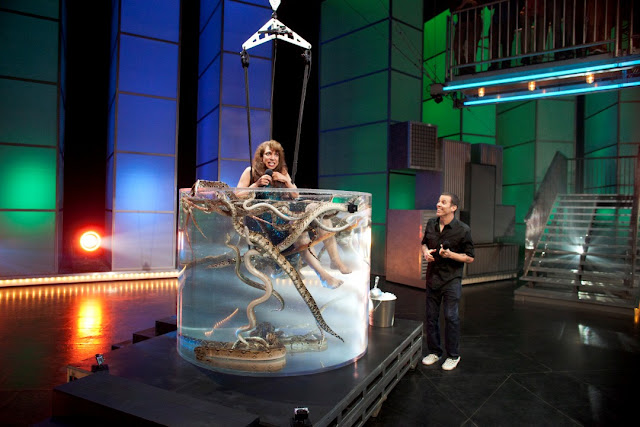 Steve-O (a.k.a. Stephen Glover) of "Jackass" fame is back on TV beginning November 23 in what could prove to be the funniest show in quite some time. Take one part The Singing Bee, where contestants sing karaoke-style, add a second part Fear Factor and a dash of Wipeout and you get Killer Karaoke. In a recent exclusive interview Steve described the premise. "It's very simple it's people singing karaoke while horrible things happen to them."

The horrible things come in all shapes and sizes from electrocution to cactuses to snakes and eels. There are three rounds of gameplay. In each round two players sing karaoke while being dunked in a tank full of eels or strapped to another person who controls their every move. After each pair performs, the audience votes to send a winner through to the final round.

And this is where the Wipeout part comes in. The three finalists are placed on a giant turntable. As they begin to sing, the wheel starts to turn faster and faster. Oh, and it tilts, too, just for good measure. Steve explained, "The whole time the wheel is spinning the prize money is increasing. The longer you stay on the wheel, the more money you get." The wheel eventually goes so fast it's impossible to stay on. Steve described it as, "Delightfully uncomfortable to watch."

The announcer on the show is none other than Twisted Sister's Dee Snyder, but sadly for Steve-O the two did not work together. He stated, "Dee Snyder, the announcer, was working sort of after the fact. So as excited as I am that he's part of the show, I didn't get to actually work with him myself. But I wish I had because my first concert I ever went to was Twisted Sister. I want to say I was 11 years old."


Steve, however did work with the contestants who are put through the ringer on the show. And while he may make a great host, he said he would not fare well as a player. He admitted, "I think that I would make for quite entertaining bits. And I say that because I'm really not that brave. In my career as a jackass I've been, you could say, idiotic, but not really that brave. Because with all the wildlife and all the different stuff I was always terribly scared and really a wimp about things… I would have had a horrible time trying to go through the challenges that we have on Killer Karaoke. I don't like snakes. I can't stand being electrocuted. I would really struggle with a lot of it."

It's not every day someone in our interviews says, "I can't stand being electrocuted." Truly a Passionistas first.

We did take a minute to ask Steve if he's tuning into Dancing with the Stars. And while he said he went to the premiere this season, he has not watched a lot of it. He remarked, "I do know that three people from my class are still on. So that's exciting." He is referring to his Season 8 competitors, Gilles Marini, Shawn Johnson and Melissa Rycroft. He continued, "I'm closest friends with Gilles. He's somebody that I've kept in touch with, so I'm really rooting for him. He's just so handsome." We didn't have the heart to tell him the sad news to him that Gilles had been eliminated just the night before our interview. Looks like he'll need to get behind Shawn and Melissa instead.

And while Steve has a reputation for being a bad boy, he has cleaned up his act in recent years. He has been clean and sober since 2008 so it was no surprise that he said he's most passionate about his health. He revealed, "I was so bad to my body. My lifestyle was so dreadfully healthy for so many years that now I feel like I'm doing some very important catch up work. So I'm passionate about a healthy diet and exercise."

We we however, not expecting his response to our question, "If you could chose one pop culture icon from all time and walk in their shoes for one day, who would you choose and why?" He replied, "I would have to go with Leonardo Da Vinci. He's my favorite. Of all the historical people, my two favorite are Leonardo Da Vinci and Albert Einstein. Both Da Vinci and Albert Einstein were vegans, which I love so much. I like to believe that Leonardo Da Vinci created the Holy Shroud of Turin as a pet project to invent photography. Just a theory that I subscribe to. He invented everything. He did a lot for gay rights. I just love everything about Leonardo. I love the way that he challenged the church. He believed that John the Baptist was the savior. He really went against the grain and I love that."

Watch the premiere on Killer Karaoke on Friday, November 23 at 9 p.m. EST/8 p.m. on truTV.