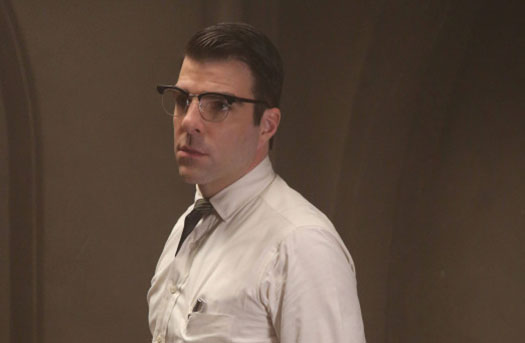 We became Zachary Quinto fans on Season 3 of 24 when he appeared as Adam Kaufman, computer analyst and Chloe’s nemesis. And while we admittedly didn’t watch Heroes, his turn as the serial killer Skylar got him rave reviews and earned him the gig as Spock in J.J Abrams Star Trek. So we were excited during Season 1 of American Horror Story to see Zachary back on out TV sets. And while we loved the first installment of the series, we were slightly disappointed to not see more Zachary.

Well this season, creator and producer Ryan Murphy has certainly changed all that. The actor is back and not only has a huge role as Dr. Oliver Thredson, but as it turns out he is also the scariest monster of them all — Bloody Face. In a recent conference call interview Zachary discussed Dr. Thredson, Bloody Face and crossing lines.

On When He Knew He Was Bloody Face
“I knew from the very beginning. It was part of the conversation that I had with Ryan about me coming back to the second installment of the show, in the first place. It very much informed the character that I was building from the beginning. As a result, I felt like my responsibility became to create a character that people could trust, or at least trust initially, and have some hope that perhaps he is actually the one voice of reason and sanity within this chaotic world. So it was actually more exciting for me to know from the beginning. It gave me more to play with and more to hold back and more secrets to keep.”

On Whether Dr. Thredson Believes in Psychiatry
“He definitely believes in it. Part of being a psychopath is an ability to dissociate from one reality and create another one completely. He does that expertly. His level of training, medical training and intuition instinct — he’s very skilled. That’s what allows him to get away with it as long as he does. So yes, he does believe in it, which is another layer of tragedy of the character is that he could have been something else. He could have made a more significantly positive contribution had he only rechanneled his traumas, his energy.”

On Preparing for Difficult Scenes
“It depends on the scene. There are different levels of preparation for different scenes in different kinds of work. So I have a combination of things that I do. I usually just find some solitude and some quiet in a little corner of the set where there’s not a lot of traffic and not a lot of people around and do what it is that I need to do. I listen to music a lot, if I need to get into a particular emotional space, I use that and just other stretching, just breathing, taking time to mostly be quiet and find that stillness. That’s important. I love playing characters that go to extreme places and I love to explore different kinds of psychological landscapes, so it is ultimately a kind of fun, but it’s also complicated and colored by the depth of the nastiness of it at certain times as well. That can be a challenging part.”


On Stepping Away from the Horror After Work
“I consider it my responsibility to myself to be able to discern the boundaries in my life. So I really try to separate myself as clearly as possible. As a trained actor, that’s part of what I learned how to do as well.  Going to college and studying, and cultivating a technique that allows me to enter some of these really complicated, psychological landscapes and not get lost in them. But, yes, I have, certainly, outlets and things that I can do, and do, to make sure that I stay grounded and clear, but it’s also that’s what’s kind of fun about it. I know that I can let myself go in certain ways, because I won’t go in others — in the ones that are important.”

On the Show Going Too Far
“They’re certainly sensitive and Ryan is a very sensitive artist. He’s constantly striving for balance in his work and never wants to go too far in one extreme direction or another. So there’s a process of refinement that the show goes through as its post production happens and Ryan is an integral part of that. There are checks and balances and measures in place to make sure that it’s driving in the right direction. So far, it is in a lot of ways. But it is more uncompromising this year. It is tackling more things at once and really diving in and examining. It feels like it’s pulling an audience along in really dynamic way, so hopefully that’s generating a response. It seems to be, anyway, with people coming back and watching week after week. That is, after all, I believe how they assess those things, at least at the network and the studio.”

On the Lines He Won’t Cross
“If there is a line that I won’t cross, I haven’t reached it yet; at least on this show. But I’m sure it’s particularly circumstantial and that I would know it if I ever was in that situation. But I think things are handled with enough respect and professional and creative acumen in the world of American Horror Story that I’ve always felt safe and I’ve always felt supported. So I think those are the two most important elements, trust and professionalism and we have those in excess at American Horror Story. So that’s good, that’s good.”