Krysten Ritter Talks Turkey and the B— in Apt 23 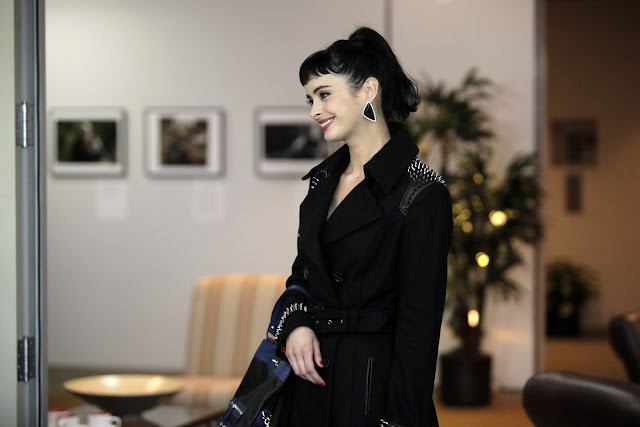 If you lived by the motto Don’t Trust the B — in Apt 23 before, you really might want to avoid her around the holidays. In an exclusive interview with Krysten Ritter, we confirmed what we had assumed. She’s much nicer than her TV persona. But she warned us that Chloe is up to no good this Thanksgiving.

Krysten talked about the very special holiday episode of ABC’s sassiest sitcom. She explained her character’s fundamental issues with the special day, “Chloe hates Thanksgiving because she thinks it’s a fake holiday where people pretend to be nice to each other and wear Uggs. It’s against everything she stands for.”

Not surprisingly to fans of the show, Chloe concocts a dastardly plan. Krysten explained, “This Thanksgiving she needs June to come with her and be her emotional support because she can’t get through one day with her mom without blowing something out, without causing some big scene. So her solution is to put June in a wheelchair so she can level the playing field with her mom and then expose June for being a fraud — for faking that she needs to be in a wheelchair.”

Playing such a bad girl seemed like a complete joy for Krysten. She giggled while describing the holiday installment, saying, “It’s so ridiculous. It’s so outrageously funny. I laughed so hard. It’s one of our best episodes yet.”

Needless to say, Krysten’s real life traditions are nothing like her TV alter ego’s. She said for her, Thanksgiving is usually filled with “turkey and stuffing and all of that.”

Although her current plans aren’t exactly what one might expect on this very American holiday. She revealed, “This year I’m going to Mexico. I’m breaking the tradition this year. I’m going to go on a four-day vacation with my man, [Hurt Locker star Brian Geraghty], and probably have fish tacos.”

No matter what Krysten is eating this Turkey Day, she has a lot to be thankful for. Not the least of which is her incredible talent, which allows her to move seamlessly between dramas like Breaking Bad and comedies like Apt 23. And that’s the way she likes it.

Krysten couldn’t pick a favorite. She acknowledged, “I like them both. The idea is to just keep switching it up. I love laughing and getting a laugh. There’s something about it that’s really fun. I laugh hard every single day at work and that’s rare. So I love doing comedy. There’s something to be said for that. I like to change it up. I don’t want to just do the same thing. I want to do drama and comedy and write and produce and do everything.”

And of all of her many blessings, Krysten admitted that there’s one little guy that she’s more passionate about than anything else. She confessed, “I’ve got a little one-year-old rescue dog. I love him so much. He came with a little bit of baggage. He’s very high maintenance and spends a lot of time at the vet. But I love him more than anything. His name is Mikey and he’s a terrier Chihuahua mix. He’s a mutt — with a lot of health problems.”

Watch clips of our interview with Krysten on our YouTube Channel.