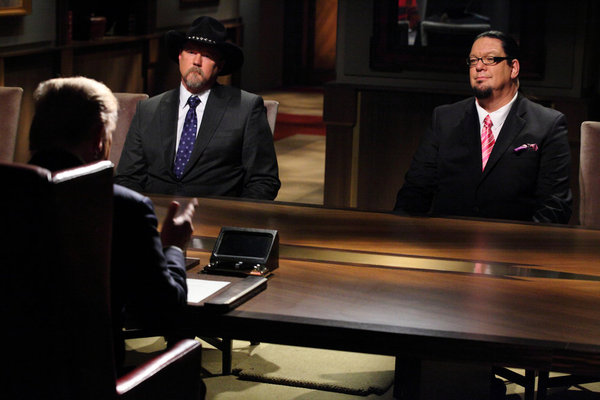 This past Sunday Penn Jillette and Trace Adkins went head to hed to take the title on Celebrity Apprentice and more importantly raise money and awareness for their charities. Trace won the season and $914,000 for the American Red Cross.

He had said of the organization “The American Red Cross showed up at my office in June, 2011, when we had a house fire. Our house was a total loss and right on the heels of the firefighters was the American Red Cross. And I was embarrassed at that time to learn that they respond to over 70,000 house fires a year in this country. I didn’t know that. I thought the Red Cross was just the huge natural disaster response team and I was embarrassed to learn that somewhere in this country right now there’s a Red Cross volunteer that’s helping somebody. And I just felt like I owed them something for being at my house when I wasn’t there. I was in Alaska so I play for the Aamerican Red Cross.”

Penn didn’t do too badly either. In the final challenge he raised over half a million dollars for his charity of choice. He stated, “I play for Opportunity Village which is now a local charity in Las Vegas… The reason I chose Opportunity Village is I’m hoping that the idea will spread. It is for people with intellectual disabilities and it is the idea of not warehousing these people or keeping them separate from us; but rather training them to have skills and [get] into the workplace. And I’m hoping that that idea has been successful. One of the things that’s wonderful about being on Celebrity Apprentice, besides the fact that it helps Penn and Teller, a bigger fact is people from all over the country have called Opportunity Village and talked about starting them in other cities.”

He continued, “Mr. Trump cannot hear this enough, that it was Elvis Presley’s favorite charity. Every scarf that he would wear in Vegas and wipe his brow and kiss and throw into the audience was made by the clients in Opportunity Village. And I will also say that they do a lot of stuff for Mr. Trump. They are two of some of his hotels and properties they do some packaging for him there as well. So it’s a wonderful charity to move people with intellectual disabilities into the main stream and let them be part of us and let us love them and appreciate them.”


But aside from playing for their charities, this season of Celebrity Apprentice also has something inspiring few of the others had. It was so much less cut throat. Sure Omarosa and LaToya Jackson were thrown in for a little drama and Gary Buesy was a handful no matter what team he was on, but in general it was a supportive and friendly season.

In the past Piers Morgan and Omarosa have gone at it. We’ve watched Joan Rivers duke it out with Annie Duke and we’ve seen Star Jones battle with NeNe Leakes. But this time many of the players genuinley seemed to like and respect each other.

Trace stated, “Just straight up just from an animalistic caveman type of view of this whole situation Penn Jillette is probably — no offense Mr. Trump — probably the most brilliant individual that I have in my rolodex. I’ve been a fan of his and friend of his for a few years now and I’ve just had the most respect for the quality of work that he’s done over the year and he’s a smart, smart guy; multi-talented. That’s enough accolades for him.”

Penn also had kind words for his opponent, “Trace is wicked smart; very, very talented; has the best voice in country music; and he’s also honest. And that is a quality that can be lost on this show. If there’s one thing this show can be proud of I think it’s that someone as honest as Trace can do this well on the show. It shows that the backstabbing and the disingenuous spins doesn’t necessarily get you to win. And I love that and I’m proud about that.”

The competitors also learned something about themselves. Penn note, “It was adjusting to working with people other than Teller. I have one of the longest running partnerships in show business. Teller and I have been working for 38 years. And the first season I treated everybody like Teller. And the second season I learned that you have to be a little more flexible. And that has actually been very, very useful. I believe after the first season of Celebrity Apprentice that I actually changed a little bit in general."

Trace added, “For me personally I don’t know that it’s improved my business acumen but it has made me aware that I have a lot more tolerance for people than I thought I had before.”

They also had some praise for the teammates who surprised them the most. Penn recalled, “I got at the end to trust Lisa [Rinna] and work with her like no one else except Teller. I just can’t say enough good about her and I believe coming into the final show the happiest moment of the entire series for me was when my final team I got to have Lisa on my team. They could have thrown me a curve and put her over with Trace and it would have driven me crazy. I can admit that now but it was what I was up all night worrying about the night before.”

Trace found inspiration from an unexpected teammate, Dennis Rodman. “I got to work with him on two or three tasks and from watching his appearance on the previous season that he was on here and then the contrast of the way he was this time. And then he ends up being our ambassador in North Korea. It’s unbelievable.”

And as for those charities, they stand to make a lot of money from this season of Celebrity Apprentice. Penn and Trace both created an ice cream flavor for Walgreens, a portion of the sales will go to their chosen organization. And that could end up being a large donation. Trump explained, “We did this once before with Snapple and one of the two did a drink that made millions and millions of dollars. The gentleman that had that particular drink made millions of dollars. I asked him. ‘How much did you make with that?’ And he said, ‘Maybe three or four million.’ I almost fell off of my chair… This guy made millions. It was Brett [Michaels].”