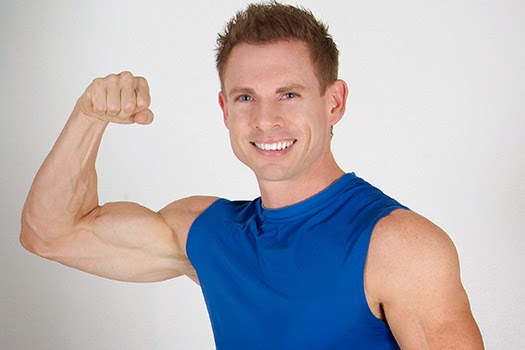 When fitness expert Michael Carson first started out, he worked with the current celebrities of the day like Carmen Electra and Paula Abdul. Now he takes his exercise cue from the past. He has developed a workout routine that uses the survival mechanism of our long gone ancestors as its basis and says it will have us all Fit in Seconds.

In a recent one on one interview Michael explained the origins of the theory, "When you're hungry, you think of food… That is a survival mechanism that turns on in our body… When we're hungry, we are focused physically and mentally on food. In pre-Civilization that meant it was time to hunt or gather for food. We couldn't go to a supermarket. We couldn't have it brought to us. It wasn't something that was fun. It was about survival…"

He continues, "When your body was in hunger state and you would mobilize during your hunger state… That window is our survival window. And if you hunt and gather while you're in a survival state and immediately ingest the food within 15 minutes of doing that mobilization, your body does not store the calories because it only uses it for building energy and lean muscle mass to survive."

The workout is quite simple. Once you sign up for the plan, you receive one 90-second video routine each week. You do this 90-second routine for 15 minutes before every meal or snack. He states that if you do the movements three times a day for 30 days, you'll lose on average 1-3 ounces of fat at every meal. You get a new routine very week, so when you get used to the movement pattern of the first workout, you switch it up so the body maximizes the effect of the routine.

Michael developed the series while working with his current business clientele who do a lot of travel for work and found they didn't have time for exercise. He wanted to give them consistent energy in the form of a quick workout. This 90-second routine moves every muscle group, enhances circulation, strengthen bones and increases blood flow to every part of the body.

After over 20 years in the fitness business Michael has seen the industry change drastically. In the early days he created some of the best selling and most iconic pop culture workouts around including the Carmen Electra Aerobic Striptease DVD series, the Paula Abdul Cardio Cheer workout and the Envy series (Arms of Envy, Legs of… and Buns of…). The latter starred the Women of the Year from Playboy, FHM and Maxim. In addition he has trained celebrities like Cindy Crawford, Brooke Shields and Constance Marie.

But Michael has noticed a big shift lately that he finds disturbing. He points out, "The biggest trend is that intensity is key for people… but they're not really getting fit."

He is bothered by the push for everyone to train like ultra endurance athletes. He notices, "It's become more extreme… They're doing activities that are great if you're 20 and you're preparing your body for something that you need to be completely super hero strength for. But it's breaking people's bodies down more… People are really doing major damage to their spines and their knees and their backs because they're lifting enormous amounts of weights."

According to Michael rather than beating up your body and spending hours in a gym every day, you can burn calories much more efficiently if you exercise for a much shorter time period during the survival window. He states, "The 90-seconds simulates the instinctual hunt that is hard wired into our body for survival… With my movements and with this small burst of activity I am able to take off seven pounds on average, every 30 days, in four minutes a day."

Now, he's not saying all the other exercise has to go by the way side. If you are already in an exercise routine, this regime will enhance it, not replace it. He explains, "This maximizes your meal's absorption of the nutrients which will help build your body better and recuperate from the other exercises that you do. And it burns additional fat so you don't have to work quiet as hard on the other days that you work out. It's like an exercise supplement that maximizes your caloric absorption and your body's ability to minimize the fat that goes onto it."

Michael also says that with the Fit in Seconds workout people have lost great deals of weight without changing their diet. He adds, "You also ingest less food naturally, because you're body has an additional response, wanting to keep it safe and be able to flea from predators, if need be, at any moment. So you won't eat as much when you have that mobilization before a meal."

And unlike many other exercise programs, Fit in Seconds does not require any special equipment or a particular environment. Michael says, "You need gravity and you need enough space to spin your arms around like you're Wonder Woman… you use your own body weight… anywhere you're at, this works."

And with the holidays coming up, Fit in Seconds can come in really handy as you have less time for workouts. "With this workout, you're one meal away from always burning fat. If you have five meals a day, you can do five 90-second routines before each one and you will not gain weight from anyone of those meals."